The following table has some sampled voices i collected as ".wav" files. They were recorded using a sound card at 22,5 kHz, mono, by clipping a probe on the voice regulator pin:


The samples b to e above repeat every completed wave, while g sounds only when the damage meter has reached 100%

These are some samples of the regular game sound

Sound board power in

Signals on the sound board

The SYNTH0 to SYNTH3 inputs to the 8035 MCU on the sound board can select a total of 16 states for type of background sound the game will play.
The MCU will then output to the digital-to-analog converter DAC-08 at position 1H. This DAC together with one half of the operational amplifier MB3614 (pos. 2G) forms a high speed wave generator. The output of the wave generator is mixed into the other sound output lines at R1. This is the 10K variable resistor marked "CPU / VR1" you see at the top left of the Radar Scope sound board.

This table shows the 4 bit words and their uses: 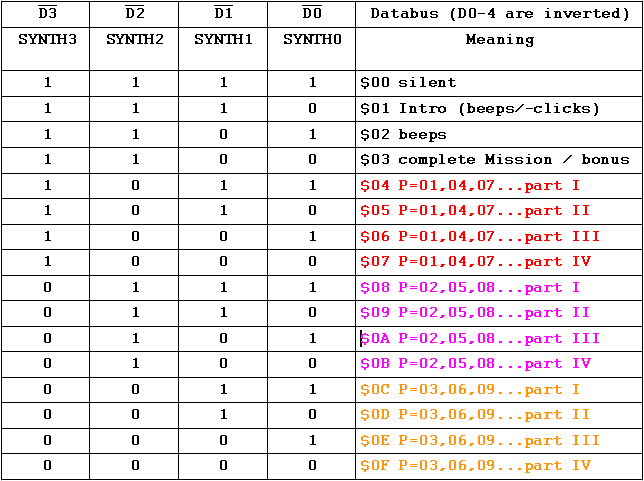 Click on the wav sample links in the table below to hear how the settings for SYNTH0 to 3 apply. Each sample is about 4 seconds, about 200KBytes long.

The Radar Scope siren sounding at the start of the game is not a sampled sound produced by the waveform generator described above. It is created with one half of the NE556 dual timer at position 3B. This is an IC which has two of the common 555 timers in one casing.

The result is then switched by a slow oscillator formed with the 4049 at position 3A, making the siren "attack" in ramps of about 1 Hz.

On a TRS2-04-SOU board, if you have the beep sounds but the siren is missing, follow the SOUND 7 sigal from where it comes into the board (see table below). It passes through an inverter (Pos. 2I) to the reset of the 556. So when SOUND 7 is low, the 556 Timer B will be enabled. Verify that this is working, check the 556 timer chip - output is pin number 9 - and the 4049 at position 3A. Check TR8 and TR9 as well as the electrolytic capacitors at C45 and C46.

Variants of the sound board

The sound board in my Radar Scope cocktail table (Model "TRS-HL") which is equipped with the voice option described above seems to be older than the TRS2 sound board used in upright machines (Model "TRS-UP-US").
The label reading "TRS-02-SOU" has a sticker. If it is removed, the printed text reads "I80-02-SOU". Maybe this board was also used in games before Radar Scope.(what does I80 mean?).

before removal of the label